Here are some of my favorite quotes that I love to read and think about.

It seems like they all convey a very meaningful message for me.

The surest way to be happy is to bring  happiness to others.....Martin Luther King

Happiness is the meaning and the purpose of life, the whole aim and end of human
existence ........Aristotle

It was only a sunny smile, and little it cost in the giving, but like the morning light,
it scattered the night and made the day worth living.......Scott Fitzgerald

Happiness is a perfume you cannot pour on others without getting some on yourself.
Ralph Waldo Emerson

Only the development of compassion and understanding for others can bring us the
tranquility and happiness we all seek......Dalai Lama XIV

There  is no happiness like that of being loved by your fellow creatures, and feeling
that your presence is an addition to their comfort.......Charlotte Brontë

What sunshine is to flowers, smiles are to humanity. These are but trifles to be sure,
but scattered along life's pathway, the good they do is inconceivable. ..Joseph Addison

I don't know what your destiny will be, but one thing I know for sure: The only ones
among us who will be really happy are those of us who have sought and found how
to serve......Albert Schweitzer

Since you get more joy out of giving joy to others, you should put a good deal of
thought into the happiness that you are able to give. ..... Eleanor Roosevelt

True happiness is not attained through self-gratification, but through fidelity to a
worthy purpose.......Helen Keller

Happiness is when the other person's happiness is more important than your own.
H. Jackson Brown, Jr

The best way to cheer yourself up is to try to cheer somebody else up.....Mark Twain

Only a life lived for others is a life worth living........Albert Einstein.

Something to do, someone to love, something to hope for.
These are the grand essentials for happiness in this life.....L.M. Boyd

Whenever Richard Cory went downtown,
We people on the pavement looked at him.
He was a gentleman from sole to crown.
Clean favored and imperially slim.
And he was always quietly arrayed.
And he was always human when he talked,
But still he fluttered pulses when he said,
"Good morning," and he glittered when he walked.
And he was rich -- yes richer than a king,
And admirably schooled in every grace.
In fine, we thought that he was everything
To make us wish that we were in his place.
So on we toiled and waited for the light.
And went without the meat, and cursed the bread.
And Richard Cory, one calm summer night,
Went home and put a bullet through his head.
By Edwin Arlington Robinson (1869-1935)

Lord, when you see my work is done.
Let me not linger on,
with failing powers, And weary hours
A workless worker in a world of work,
But with a word, Just bid me home,
and I will gladly go,
yes gladly I will go.

One night in late October,
When I was far from sober,
Returning with my load and manly pride,
My feet began to stutter
So I lay down in the gutter
And a pig came by and lay down by my side.
Then a lady passing by was heard to say:
"You can tell a man who boozes
By the company he chooses,"
The pig got up, and slowly walked away. 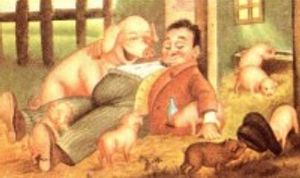 Tís a wonderful story that Shakespeare told
In "Merchant of Venice", a play
Depicting love so true, and friendship so rare,
As is seldom seen today.

Tís a story too of hatred and greed,
Unmerciful is Shylock,
When he seeks to obtain his pound of flesh,
All pleas for mercy doth mock.

But "Love finds a way to conquer all"
A saying so old and true,
And Portia outwits old Shylock's scheme
With a plan that was clever and new.

Tís a story too of suitors three,
All vying for Portia's hand,
Till Bassano's choice of the casket of lead,
Made him the happiest man in the land.

So the story goes,
And tís true today, the same as in long ago.
Greed and avarice does not pay.
It will only bring sorrow and woe.

It is well to take heed as through life we go.
There are some things wealth cannot buy.
Far better the love of family and friends.
Than alone with your riches you die.

The value of a college education is not learning many facts but the training of
the mind to think.

My god concerns himself with the lawful harmony of the world.......Not the fate
and doings of mankind.

A human being is a very small part of the universe.......Just a speck in the annals
of space and time.

Imagination is more important than knowledge for knowledge is limited.

I am by heritage a Jew......By citizenship a Swiss ,,,, By makeup a human being
without any attachment whatsoever.

The Bible.........A collection of honorable but primitive legends which are never
the less pretty childish. Jewish.........the most childish.

I have no special talents. I am only passionately curious.

We have no freedom of will......Genes and endocrines control our destiny.

Only a life lived for others is a life worth living.

He who can safely drive a car while kissing a beautiful woman, is not giving
the kiss the attention it deserves.

I think Albert was not only the greatest scientist in recent history, but he also
was quite a ladies man.

The grandmother of our childhood friend, Bobby Ann Jones, wrote this
little poem about me and my sisters and sent it to our mother.

Georgie, Ruthie and Mildred
Came through my garden gate
George came first then Ruthie
Then Mildred so sedate.

"These guns I have" said Georgie
"Are Paul and Herbert's guns"
"And who my dears may you be"
I asked the little ones.

"That's Mildred, this is Ruthie
and Georgie, that is me"
So said the little gentleman,
His sisters first named he.

Through my house I took them,
to show them on their way,
that Paul and Herbert's playthings
they'ed have without delay.

"Come Mildred", said big brother
to Mildred ,always last
so trailing clouds of glory,
through my house, they past.

As Hitler's main partner and adviser, I have to believe him.
"Naturally the common people don't want war: Neither in Russia, nor in England, nor
for that matter in Germany. That is understood. But, after all, IT IS THE LEADERS of the
country who determine the policy and it is always a simple matter to drag the people along,
whether it is a democracy, or a fascist dictatorship, or a parliament, or a communist
dictatorship. Voice or no voice, the people can always be brought to the bidding of the
leaders. That is easy. All you have to do is TELL THEM THEY ARE BEING ATTACKED, and
denounce the peacemakers for lack of patriotism and exposing the country to danger.
IT WORKS THE SAME IN ANY COUNTRY."...............Herman Goering

When I was doing basic training in the Army, we used
to chant this little ditty as we marched through town.